Well that attempt to get caught up didn’t go as planned…still have Vanuatu and Chile to catch up on, but in the meantime, I’ll tackle something more manageable…

I’ve wanted to visit the northern tip of New Zealand ever since I got here. Not sure why exactly…thrill of exploration? Something about extremes? It’s not like there are any volcanoes up there. But still. Point is, wanted to go there. Didn’t go there. Went part of the way there. But still not there. Now I did. Sweet as.

The opportunity arose as a final trip for my friend and traveler-extraordinaire Aurelia who was finishing up hear nearly-a-year in NZ and Australia. She was already up in Northland, so I drove up to meet her in the quiet seaside town of Whangaroa. The town also contains an interesting landmark, St. Paul’s Rock. I can’t tell you a whole lot about it other than that it is a remanent of millions of years old volcanic activity in Northland. 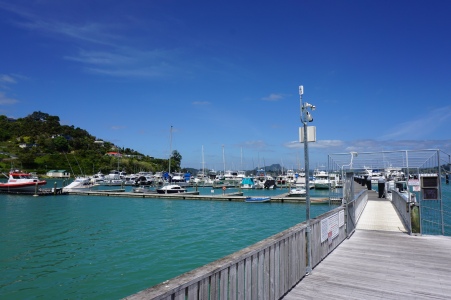 The marina in Whangaroa

A little rock on a hill?

St. Paul’s Rock…not so little after all!

View from up on the Rock.

Some chains to help climb the steepest part.

From there, we drove north toward the top of Northland, stopping several times along the way at some nice beaches and other stops, including Ninety Mile Beach, an extremely long, straight beach that runs all the way up northern Northland’s west coast. You can drive on it (when the tide is far enough out, anyway), but I’m a bit of a chicken, and it didn’t seem like the view would change much in two miles (or 20), so we were content to take a look around and continue on.

Pretty beach on the drive up…first of many.

Beach as far as the eye can see… 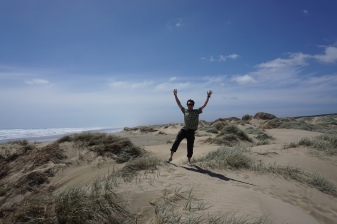 Yay dunes! They seem reasonable in size. I wouldn’t say giant, though…

A bit of sand art.

Next stop was Cape Reinga! We did it! Woo! Cape Reinga isn’t technically the northernmost point on the North Island. That would be Surville Cliffs, which is about three km farther north (but 30km away). But it is the end of Route 1, NZ’s end-to-end highway, so close enough…for now, anyway. There’s a lighthouse and some great views into the endless Pacific Ocean.

Looking out from the Cape…

…out onto the Pacific. 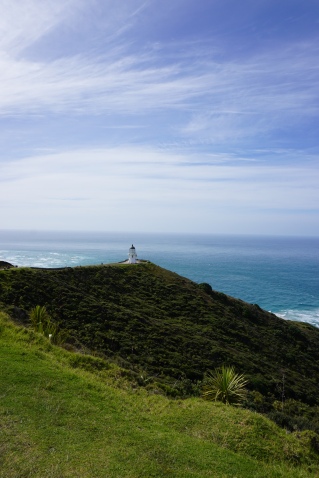 We’re as tall as the lighthouse!

Next up was the Giant Sand Dunes. Remember the ordinary-sized sand dunes in the earlier photo? Forget them. These earned their name, for sure! Big enough that people rent boogie-boards and slide down them. We passed on that in favor of wandering about, geo-nerding out over the dune structures, and generally hoping we wouldn’t get sunburned.

See the sandboarders in the distance.

Reminds me a lot of White Sands, New Mexico. And amazing how the dunes come right up against the green forest!

Our campsite for the night was Spirits Bay, still way up north, with a good view of Cape Reinga. You can even see the lighthouse shining once it gets dark. The beach there was beautiful and made up of all sort of shells. There were wild horses. Sunset over the cape. What more could you want?

Look at that sand! I’m sure I looked dignified with my face up against the ground taking this photo! 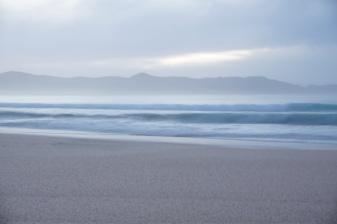 The next day cemented for me Northland’s claim to some of NZ’s best beaches. We leisurely worked our way back south, stopping along the way in the Bay of Islands, another of NZ’s older volcanic areas. On the recommendation of a friend, we stopped in a town called Rawhiti, which was tiny, but very nice. We got to take a walk around the beach and listen while a local guy strummed away on guitar.

Hadn’t seen whatever this plant is yet.

The water is so clear

Our best discovery, however, came purely by luck. We saw a sign for a beach parking lot on our right, and an awesome looking tree on our left, so we decided to make a quick stop.

The tree that caught our attention

Isn’t it an intriguing tree?

First view of this wondrous beach

That quick stop turned into a longer one, as it turned out to be one of the most stunning beaches I’ve ever seen. From the cool rock structures on the beach, to the clear water, the bright green hills right alongside the sand, everything about it was just awesome. Definitely a place to make a return trip.

I want the bach on that hill.

Farther south, we found another nice place to camp for the night, so we pitched our tent and enjoyed the sunset.

Our final stop before getting back to Auckland was the Mermaid Pools at Matapouri. They are essentially large tide pools that form on the rocky area by the water, large enough to swim in. You do a short climb over a big hill, and then you’re there!

First view of the pools 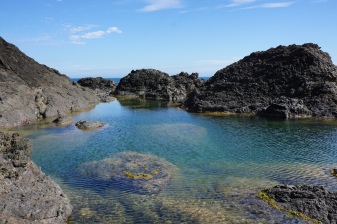 We didn’t have time for a swim, but we did climb down to the pools to check it out.

From there we raced back down to Auckland so I could go to some meetings at uni, and our 3-day trip was done!