Conferences are important in geology as a way to share your research with others in your field, as well as a way of networking. Especially in a super international field like volcanology, it’s a really good opportunity to meet others whose names you recognize from papers you’ve read/cited, old friends from the other side of the world, and potential future collaborators.

As I mentioned, volcanologists usually find a way to have their conferences in volcano-y places, and Puerto Varas fits the bill. It’s fairly close to two volcanoes, Calbuco and Osorno, and was even impacted by the 2015 eruption of Calbuco. Puerto Varas is considered the “German” town in Chile, as such is has a lot of European influence in the culture. It’s also a bit touristy, so it felt a little less “Chilean” than the smaller towns I’d been in to this point. 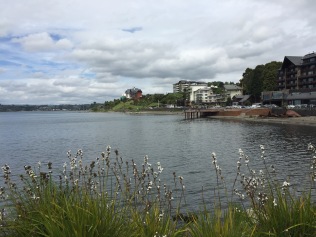 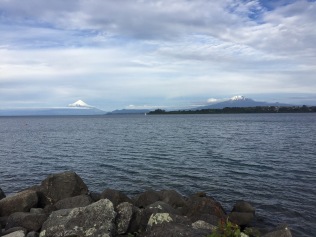 There’s the two volcanoes! Osorno is the perfectly conical one on the left, Calbuco is the more lively looking one on the right.

Getting excited for conference time. 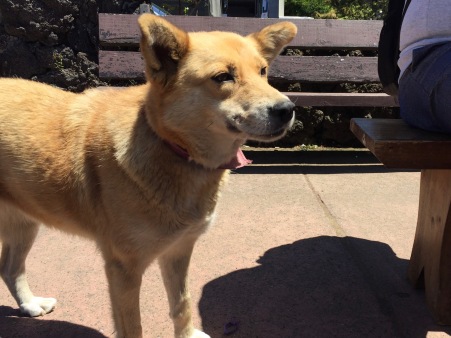 Lots of nice sunsets with the volcanoes in the distance.

Another empanada, along with some “mote con huesillo”, a non-alcoholic sweet drink with a dried peach and wheat in it. 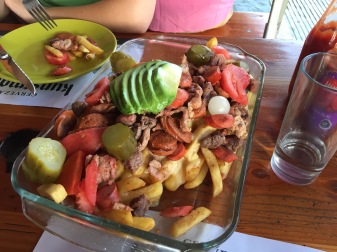 A geologic conference usually involves lots of talks and posters. You get a big program at the beginning, and you decide which ones interest you the most or are relevant to your research. It also means if there’s people you want to meet, you can get an idea of where they might be during the conference. I had a poster during the second half of the conference, which meant the rest of the time I was free to attend as many useful talks and visit as many interesting posters as I could.

This conference had three streams of talks going at once, usually split into different categories ranging between physical volcanology (chemistry, physics, fieldwork, etc.) and volcano communications/social science, so you could hop around as things went to get a good mix of all the subjects you wanted to learn about. The poster sessions also had a mix of all the categories so you could talk to people from all parts of the volcanology community.

Many of you know that I like making films about my and others’ research. I’m not alone! I was really excited that a couple of volcanologists from universities in England were hosting a movie session one evening (the VolcanOscars!), showing self-made geology movies from conference attendees. I submitted my Vanuatu movie about Ben’s research on Yasur, and it was pretty surreal to see it up on the big screen with a room of 100 or so people ooohing at the explosions.

A big conference needs big projector screens. Sophia is happy to be here.

Registration desk, where you get your program and other goodies.

An example of one of my friends from the UK, Lara, giving a talk.

Showing my movie at the Volcanoscars session, super exciting for me!

The instantaneous translators were amazing, it meant that everyone could participate regardless of whether a session was in English or Spanish. Felt like being at the UN!

My poster! Full of pretty photos and figures.

The opening and closing ceremonies has a number of cultural performances.

As part of the conference, we had a field and cultural trip in the middle. Since so much of Cities on Volcanoes is about understanding the relationship between people and volcanoes, we visited a town, Río Blanco, that had been affected by lahars (volcanic mudflows) from the 2015 eruption of Volcán Calbuco in order to see the effects firsthand and talk to some of the townspeople.

We were able to see the lahar path and some affected buildings, and we were treated to a presentation by some of the local officials on what it was like living through the eruption. They told us what their experience was, people’s reaction, the government’s response, and how they feel about the possibility of a future eruption. All in Spanish, of course, but one of the conference organizers helped to translate as we went.

A church in Río Blanco that just narrowly escaped the lahar (with Calbuco in the background).

Climbing down into the lahar channel. 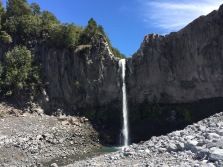 A waterfall upriver along the lahar path.

A fishery building that was destroyed by the lahar.

Meeting with the locals to hear about their eruption experience.

Performance centre in Frutillar where we got to see a concert after the show.

We were generously taken to a concert of Inti Illimani, a pretty famous Chilean folk band.

After the conference: Osorno and a bit more

Once the conference had finished, I had a couple days left in Puerto Varas before the next part of my trip. To take advantage of that time, Sophia, a fellow Auckland PhD who I was staying with, and I booked a tour to Osorno volcano. In the end, we got driven there and shown around by two Chilean guys, a bit surprisingly, all in Spanish, meaning after a week of mostly English at the conference I got to hablar español un poco mas!

It came to greet us every time we got back to our lodging! 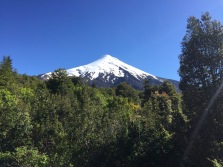 Volcán Osorno. It’s such a perfect cone because none of the recent eruptions have come out of the top, rather always out of a side vent. 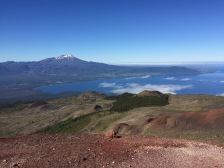 Looking across Lago Llanquihue to Calbuco volcano to the south. 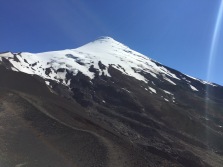 Osorno is a skifield in the winter.

One of the small side eruption craters. 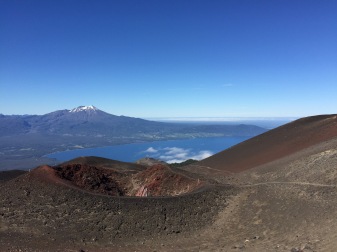 A red scoria crater with Calbuco and the lake behind.

Me wearing my conference shirt, with Osorno on it, standing in front of Osorno

With my time in Chile ending, I explored PV for another day, sent some postcards, enjoyed some more Chilean food, and then, since I was in the same hemisphere, I caught a flight back to Santiago so I could fly back to the US for a quick trip home. 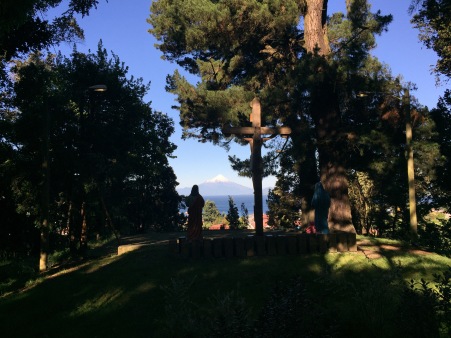 Monte Calvario, a little park in PV with good views of the volcano. In this case, looking at Osorno was literally a religious experience! 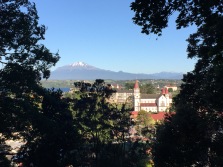 Also had views of Calbuco, and PV’s famous church.

So many volcanoes to see out the window on the plane flight back to Santiago!

Bagels! As in good ones, not bagel-shaped bread. 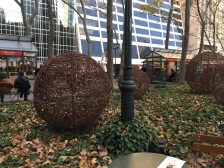 After seeing family and doing a fun things, I had a much-delayed, fairly hellish trip back to New Zealand via Chile. The one bright spot was a long-enough layover in Santiago that gave me a chance to go into the city for a little more sightseeing. I had one last ceviche and took a funicular to the top of San Cristobal Hill. 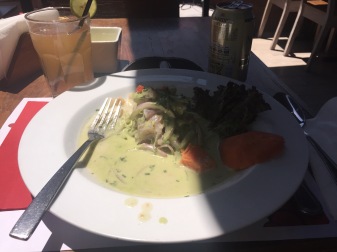 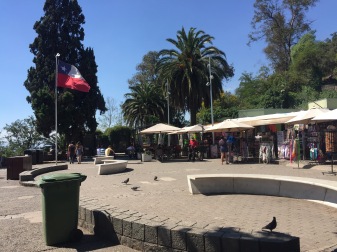 Some little stalls in the park.

View of Santiago from the top of San Cristobal Hill.

Gotta have some religious statues.

Reminded me of my days surreptitiously photographing the inside of churches in Italy.

Santiago is surrounded by awesome mountains too.

There were many of these colorfully-painted crosses.

And from there, I finally made it back to Auckland, where I could enjoy my bottle of Chilean pisco in peace.