I promised some more geology lessons way back when and I haven’t followed through very well on that, but now I’ll try to make good on that promise. Or at least, I’ll lay the groundwork for the some science.

While I’ve mentioned before I’m interested in all the deposits on the northwestern side of Mt. Taranaki because they are the most recent, the other best place to find really recent stuff is by going straight to the source. What’s younger than the lava right at the top of the volcano?

Before we did any serious sample collecting, I decided to take a recon/fun trip to the top to see what it was like. That way when I planned the serious fieldwork, I would know what I was getting us into. Where do we want to sample? How hard is it to get there? How much can we do in a day? Etc.

My plans for this coincided perfectly with my geo-friend  and super-adventurer Aurelia’s arrival in NZ back in February, so we headed down there to check things out. After driving up to the visitor’s centre, we hiked about 1.5 hours in to the Tahurangi Lodge, an awesome mountain house owned by the Taranaki Alpine Club (that generously let me join), where we stayed for the first night. This gave us a nice head start for the real climb. 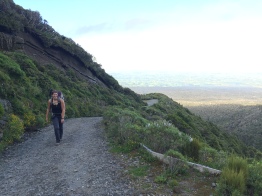 Just starting the climb, all bright-eyed and fresh-legged.

Making our way up the final section before the Lodge, called “The Puffer”.

While it is nice and paved, The Puffer is definitely steep enough to deserve its name! 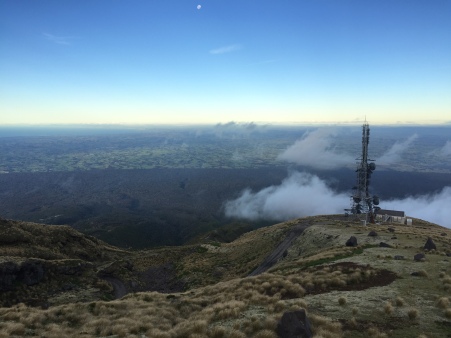 View from the hut. I always love looking at the really clear edges of the park. 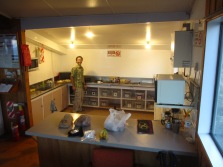 A full kitchen and more. What luxury! 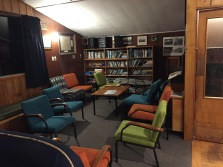 And fun games to keep us occupied.

The lights of New Plymouth in the distance.

The next morning we got an early start and headed up to the top. It was quite the climb! Not technically difficult in any sense, anyone in good enough shape could do it. But that doesn’t mean it wasn’t pretty hard work! From the lodge, there’s three main sections to go through to get to the top. The first third is just dirt tracks and steep, long staircases. The second third is probably the hardest–a huge field of loose scree that shifts under you every time you take a step, meaning progress is pretty slow and frustrating. The final third is a scramble over a series of rocky, jagged lava flows called “the Lizard”.

Nothing like the sight of a volcano in the morning.

Our lovely lodge…and another volcano or two off in the distance. 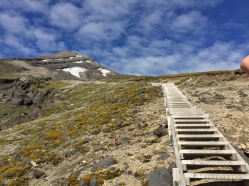 I think scree is probably named for the sound you want to yell while trying to climb up it. Screeeeee! 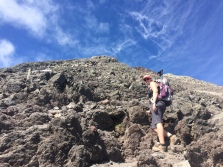 Getting there, but still have to climb the Lizard!

Finally, after these trials, you reach the crater. And despite it being summer, it was full of snow! The crater contains Taranaki’s current summit lava dome, which was created during its most recent eruptions and rises to the volcano’s highest point of 2518m. It’s also collapsed to the northwest, as we’ll talk about later.

Looking towards the crater wall.

The Shark’s Tooth, another major feature near the summit.

The eastern side of the dome.

Fantham’s Peak, a lower peak on the south side of the volcano.

Some sweet as lava rocks.

Me, just reveling in the awesomeness of it all.

After exploring the crater for a while and taking note of good sampling sites (and even taking a short nap while we waited for some clouds to blow through), we were almost ready to head back down. We wanted to go up to the very top, but it was so foggy that it didn’t seem worth it. Luckily we decided to go for it anyway, because just as we reached the summit everything cleared up and we got a great view.

Pretty interesting landscape inside the fog… 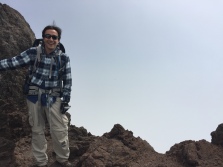 Heading out along the top of the dome.

The way back down was quite a bit faster (from the lodge, it was a bit under 3 hours to the top but less than 2 hours to cover the same distance on the way down). As much trouble as scree fields are to climb, going down they’re super fun. If you’re willing to end up on your butt a few times, you can kind of jump from foot to foot and ski down as it shifts under your feet. Whee! After stopping for a short break at the lodge, we hiked out the rest of the way. Surprisingly, the final hour or so, which should’ve been the easiest part, was actually frustratingly hard because my stupid wobbly toddler legs wouldn’t go where I wanted them to and we couldn’t walk properly. Nonetheless, we made it! The next day was the sorest I’ve probably every been (but, you know, in a good way). And this was just the test run for the real thing!

Great view of Pouakai on the way down.

I love you, Tahurangi Lodge!

Oh, Puffer, why are you soooo steep?

Relaxing at the beach on the following day.

Now that I’d been there and knew what things were like at the top of Taranaki, I was ready to plan our big sampling expedition! See, now you’re ready for the science next time.

Oh yeah, as a bonus, check this out! While we were up there we shot an (only slightly embarrassing) educational video for my mom’s 3rd grade class that my brother edited into an awesome geology lesson. I think it turned out pretty well!