While the last few weeks have been pretty dull in terms of work–just trying to get ahead on my proposal writing and literature review–I’ve been able to get away to explore more weekend than not. In the last few weeks, I’ve gone away three times. Two parts adventure, one part science. Or perhaps all parts science. Science always…

A few weekends ago, my friends Tim and Annika organized a mountain biking trip to Rotorua, a city a few hours southeast of Auckland. Now, those of you who know me know that I am dangerously (hilariously?) bad at biking. So after trying to explain to my friends on the trip that, no, I won’t just figure it out and be fine once I get going, they suggested I just borrow the car and explore on my own during the day, then hang out with them after they finish. Sounded like a great plan to me!

Unfortunately, the weather on the first of the two days was super bad (which made me even more secure in my decision not to try to bike), so I decided to check out the city itself (about 60,000 people, 10th biggest in NZ). After getting some coffee and walking around in the driving rain, I made it out to Lake Rotorua itself.

Lake Rotorua like many other lakes on the North Island is actually a volcanic crater (part of the Taupo Volcanic Zone that I’ve mentioned many times before) that was formed by an eruption over a couple hundred thousand years ago. It’s the second biggest lake in the North Island, though it’s pretty shallow. And I might have pondered all of this, except I was cold and soaked and wanted to get on with my day, so I hightailed it back to the car.

I decided to do a scenic drive to some of the other volcanic lakes in the area ending at the most important, Lake Tarawera. The rain made the drive a bit less scenic, I figured I’d have to come back again sometime when it was nicer. 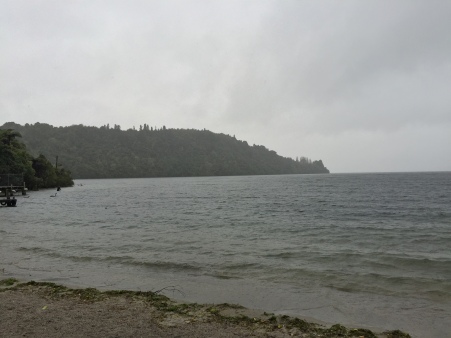 At least I made a friend!

Map of the lake

And that was it for my exploration mostly. It was more fun than it sounds/looks, I promise. And then, of course, once I explored all day and my friends biked in the rain/mud/hail, the sun came out for the rest of the day. Peeeerfect. There was still fun to be had, though. Rotorua is very thermally active, so it has lots of natural hot pools, which we took advantage of. 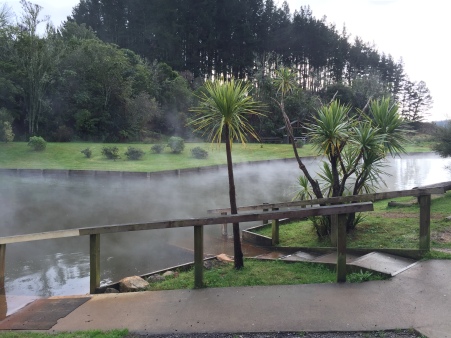 Hot pools have varying degrees of naturalness. Some are very artificial, while others are totally untouched by manmade stuff.

This one was somewhere in between

View from the bach once the sun came out.

The oven was trying to send us a message while we were cooking dinner.

Lake Tarawera is located right next to Mt. Tarawera, a volcano that is responsible (in 1886) for one of the largest historic eruptions to take place in New Zealand. Unfortunately I didn’t get much of a view of it because of the weather.

Biking must’ve been pretty exhausting, because the next day I had a few friends join me for my exploration. The weather was much nicer, so we ended up doing a few of the same things again.

First, though, we took a quick look around a Kuirau Park, a thermal area located in the city. Think Yellowstone-like sulfur-smelling, steaming pools, only a lot less impressive. 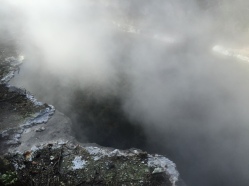 I’ll just take a look into this steaming pool… 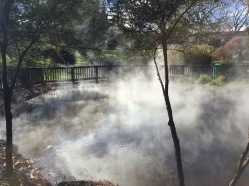 No good! It’s full of steam! 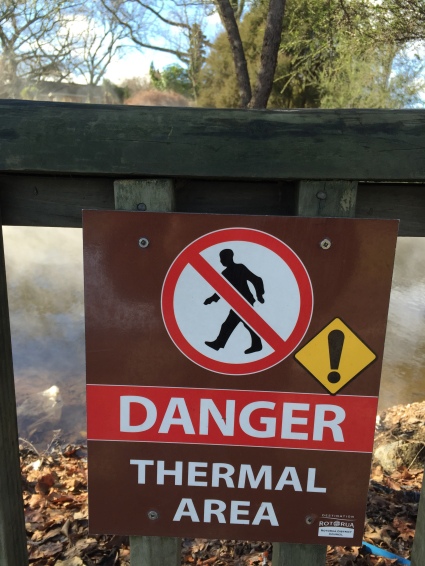 Then we took a drive back to Blue Lake and Lake Tarawera. It was still pretty cold and windy, but much sunnier, so it was a much nicer view of everything. 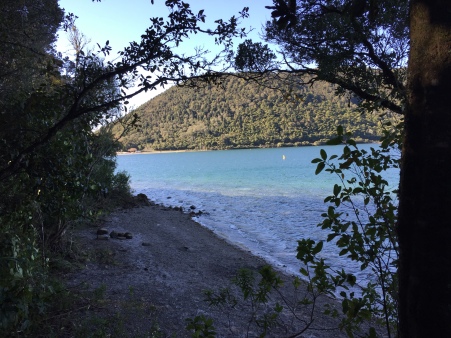 Blue Lake through the trees

The beach is probably nice to hang out on in summer 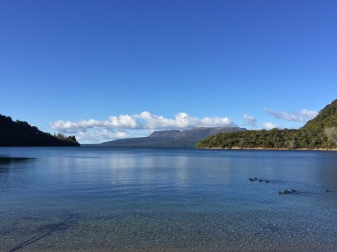 Just a bit nicer than the day before, eh?

Finally, we took a trip to Whakarewarewa Forest (say that a few times!), also known at the Redwoods. I learned at the visitor centre that in an interesting twist given New Zealand’s current obsession with stamping out any non-native potentially invasive species (“It’s foreign! Kill it! Kill it!”), at one time the government was just kind of planting random things to see what would grow well, and one of those things was the California Redwood. Inseed, it did grow well and now there’s a whole little forest of it in Rotorua. Pretty neat. My theory is that if one day this history is lost, people will look at the Redwoods and assume that whole story happened in reverse and that Redwoods originated in New Zealand since it is the place known for the awesome interesting stuff.

Lots of tree-y stuff under the water 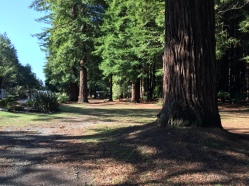 Trees!? What do you want from me?

And that was kind of it! There were a couple of geysery-type areas, but they are pretty expensive to visit, and I’ve been told they put dish soap in the geysers to make them erupt (filthy cheaters!) which kind of takes away from the natural awesomeness of it all.

All in all, Rotorua was neat, but a little touristy. But the next place I went was definitely a lot less touristy, so come back for that!