It’s been a quiet couple of weeks, and will probably continue to be so, in terms of geology. A combination of factors (weather, people’s availability, etc.) mean we probably won’t do another trip for a bit, so I can talk about a mishmash of other random stuff in the meantime.

So what are you actually doing?

I’ve mentioned bits here and there so far about the work I’m doing, but I haven’t yet really explained what it is I’m doing in New Zealand, so here goes… While understanding the mechanics of how volcanoes erupt is extremely important and interesting,  and lava and explosions are super cool, the part of volcanic eruptions that interest me the most is the way in which they impact the people living nearby (and not so nearby). I want to look at how the hazards that come from volcanoes affect people and how to communicate to people the dangers they face as a result of living near an active volcano.

For my project I’m focusing on a particular volcano, Mt. Taranaki, and a particular type of hazard, lahars. As I may have mentioned at some point, lahar is the general geological term (taken from Indonesian) for a volcanic mudslide. What makes lahars different from other volcanic hazards is that they can (like lava, ash clouds, etc.) happen during an eruption, but they can also happen shortly after an eruption, or during a period in which there is no eruption at all. This is because they can be triggered by all sorts of things, from eruptions to earthquakes to snowmelt to excessive rainfall. They can travel at speeds up to 60 mph and distances over 100 mi from the volcano, so they’re obviously pretty dangerous.

What I’m doing is using a variety of methods including sedimentology, geochemistry, and paleomagnetism, to reconstruct the history of lahars on Mt. Taranaki. Basically, where did they go, when did they go there, and how often did they go to different locations? I’ll get into the methods more as I actually do them, but it always starts with going into the field. We’ll be hiking around the river catchments to find lahar deposits and then taking good notes, photos, and samples when we find them. Hopefully the result will be a better understanding of the hazards posed by the volcano, which we will then communicate to the people living in towns and farms on the flanks of Mt. Taranaki.

Planning the next trip on my homemade map

While I’m in the office, I mostly read lots academic papers that relate to my research and try to compile all the useful information from them in an organized way. I also look at maps and create plans for future fieldwork. For example, based on papers I’ve read I’ve picked out a number of sites to go look at on our next trip (whenever that is). Once we’ve taken a good look at different spots and picked the best ones, we’ll gather our equipment (hopefully in August or September) and go collect some samples to take back to the lab for various tests.

So what are you actually doing? (Non-geology edition)

In between planning more research trips and getting work done at the university, I’ve had time to get around and outside of Auckland a bit more. Whether it’s just taking a walk, playing with all the awesome cats that seem to hang out on my street (and getting to work late as a result), or checking out some of the local establishments, it’s good to see new parts of the city whenever I get the chance.

Highway that runs east along the southern shore of the harbor

The harbor. A boat.

Even pretty random parts of Auckland can be quite nice

You can see the City Centre from all over

For example, there’s a really nice French market pretty close to my house that I go to every weekend that has awesome producey type stuff and awesome Italian cheeses. And there’s a nice walk that I can take to or from work though Auckland Domain (a massive park) if I’m not in a hurry and the weather is nice. 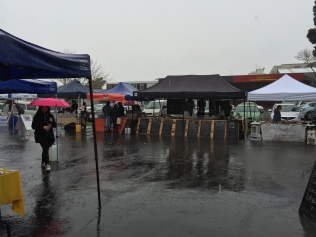 The French market. It’s a bit more pleasant when the weather is nice

Walk home through the Domain 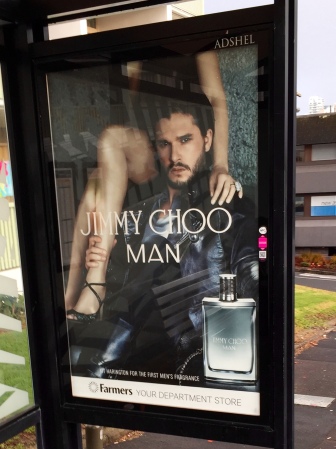 Jon Snow tries to sell me shoes (or cologne?) every day on my way to work

For getting out of the city, a couple weekends ago I took a trip with some friends to Muriwai beach on along the coast about an hour west of Auckland. It was a nice black sand beach to take a walk along, and there were lots of people kite surfing on some pretty rough looking waves. 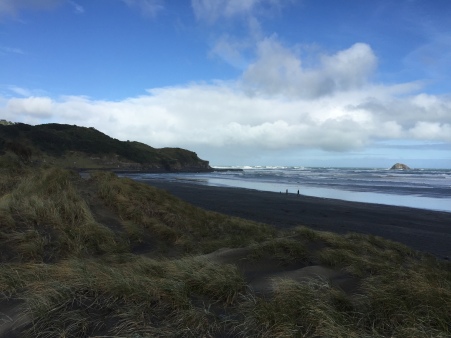 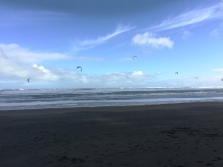 The impassable “river” that marked the end of our walk

And I wouldn’t be a geologist if I didn’t spend at least a couple moments geeking out over the cool dunes and ripples and stuff. 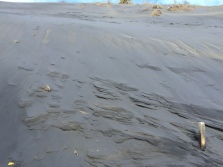 Don’t know exactly what it is, but it’s geology for sure! 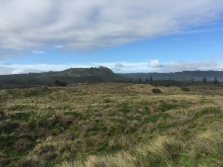 On another recent weekend, we took a trip to the beach house (called a Bach in New Zealand, see below) of a friend. It was a chance to head east of Auckland, I hadn’t gone in that direction yet. After the insanity of Houghton winter and a particularly harsh NJ winter over the last two years, I wasn’t really looking forward to skipping summer and immediately having another winter upon arriving in NZ. But if “winter’ and “beach weather” can sometimes be synonymous here, I guess I can’t complain.

A quick lesson in NZ English. Study up, there will be a quiz later.

The Kiwi accent and vocabulary is definitely distinct. In terms of accent, out of American, British, and Australian, it’s probably closest to Australian, but very clearly different once you hear it enough. And in terms of vocabulary, it has an interesting mix of words from other types of English (siding with American over British English more often than you’d expect), and plenty of unique words on top of that. Here are a few of the ones I’ve encountered so far just for fun:

Bach – A beach house. Doesn’t have to be particularly fancy, not just for rich people.

Four wheel drive – SUV (and a mini van is a people-mover).

Flash – As an adjective instead of flashy, showy, etc.

Yum – As an adjective instead of yummy, ie. “That dish is so yum!”

Tramping – Hiking, but sort of more serious than just day-hiking. Stuff at outdoor shops would be called tramping gear.

Good on ya, mate – Praise if someone says something you approve of or does something good. This is one of those stereotypical ones that are just fun to see that people really do say, like when I got to Italy and realized people actually do say Mamma mia!

And that’s the deal!

Slow times, but I’m still trying to take a trip or two somewhere when I can. In the meantime, I can work on more mundane stuff like getting an NZ driver’s license (almost done), finding a place to play tennis (and people to play with; still working on it), and watching the world cup at work instead of working (though I guess that form of procrastination is no longer available. Yay America!).