Now that I’ve been living here almost a month, I’ve had the chance to get a better feel for Auckland, explore my neighborhood, get started with my studies, and pick up on some small things that might be different from back home.

Once I finished moving into my flat, I took the opportunity to walk around Parnell and the adjacent neighborhood, Newmarket. Parnell seems like the place to go for bars and restaurants of varying fanciness, while Newmarket is upscale area that seems to be a major shopping center for Auckland and also where my nearest supermarket is.

Broadway, the main street in Newmarket

Lumsden Green, a tiny park with some restaurants around it

Weird rainy statue in the park

No real IKEA in NZ 😦

Timeout for NZ difference number one! And it’s an obvious one that affects you in a less obvious way. Like in England, they drive on the left side of the road here. Of course once I eventually drive that will affect me in a big way. However, it might be even more important when walking. Remember when you were taught to look both ways before crossing the street? Look left, then right. It’s surprisingly hard to relearn it in the opposite order, especially when trying to figure out where cars are going to be turning from or where they’re going to be entering and leaving roundabouts. I haven’t become a pancake yet, though! So far, so good.

The food in the supermarket here is actually surprisingly similar–compared with Europe, it’s actually super easy to even find the same brands of most things that we have in America (though I’ve been told some things taste different, Snickers bars were the example given. I’ll have to do a test for science!). There’s a couple things I’ve encountered here that are new to me, though.

One of my first days in the office, there was a big bowl of feijoas up for grabs. What are feijoas? They’re awesome little green fruits that you eat by cutting open and scooping out with a spoon or your teeth. Sort of like a Kiwifruit, but they have their own unique taste, and it’s really good! I’m hooked! Unfortunately, I’ve been told they’re only in season for a couple months, and that time is almost over, so I’d better enjoy as many as I can fast.

Be honest, you’d be skeptical of “tasty” flavored cheese too, wouldn’t you? I assumed that in the same way we in America give our worst cheese the best name, they would do the same in New Zealand. Thankfully, not the case. For some reason it’s what they call sharp cheddar cheese. Tasty indeed.

Marmite (and its Australian cousin vegemite) is super polarizing. It’s a super-salty yeast-based sandwich spread that most people only like if they grew up eating it. My flatmate let me try some the other day and, while I can’t say I loved it, I’m not ready to give up on it. It tastes kind of like eating a really salty beer, if that statement makes any sense at all. I’ll have to revisit it sometime.

Getting Out and Around

In the months leading up to coming to Auckland I was lucky enough to make a few Kiwi friends who are in Auckland now and are really cool (and have cars) and are willing to show me new places that I might not get to on my own.

Last weekend I went with a couple of friends hiking west of Auckland (it’s good to know you don’t have to go too far outside the city to get to some nice nature). We did a tricky and super muddy but very fun trek along the Huia Dam Reservoir. 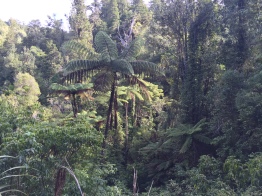 A cave! Actually it was a probably-collapsed man-made tunnel. 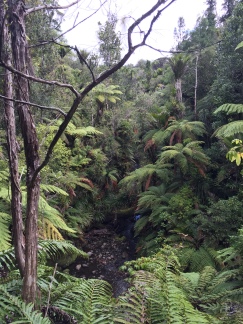 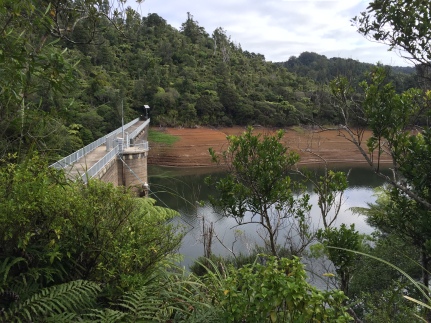 After reaching the dam (where the water level was super low–google it to see a comparison of where it can be), we took a different route back that gave some great views of the banks of the reservoir and even a waterfall.

View from the dam

A look down the other side of the dam 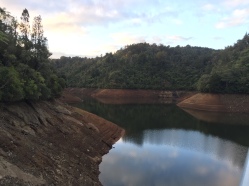 The view farther along the trail

Look at those banks, just look at them! 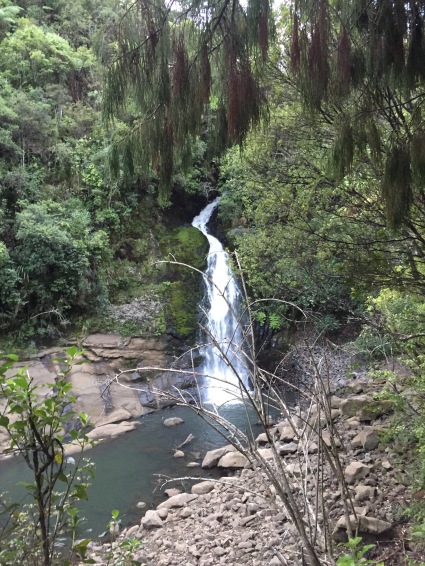 A pretty, if nameless, waterfall

While we were originally expecting to get back to the car after dark, thanks to some short-distance hitchhiking (on the first car that went by! Points to Kiwis for hitchhiking friendliness) we actually had the time to drive all the way out to Piha on the western coast to catch the tail end of the sunset. Piha itself is supposed to have really pretty beaches (and good surfing), so I’ll have to get back out there sometime, but even viewing it from afar was nice.

Did I mention that Auckland is built on a volcanic field? Sort of like the area I was in France, it’s full of what are called monogenetic volcanoes–very little volcanoes that are formed when they erupt just once and then never again. Frequently, after a lot of time has passed, they just look like big grassy hills. But I know what they really are. You can’t hide from me, cinder cones! I’ve got your number!

Today another one of my New Zealand friends who I met in the US took me around to look at some Auckland volcanoes. We started out by going to Mt. Eden, the highest natural point in Auckland. A tricky thing about NZ geology is that many locations have both a Maori and an English name, and it’s not consistent which language is the primary name. For example, Mt. Eden’s Maori name is Maungawhau, but it’s primarily known as Mt. Eden, whereas my volcano is called Taranaki rather than its English name Mt. Egmont.

Anyway, from the top of Mt. Eden you can see all of Auckland and out into the water that surrounds it and lots of the other little volcanoes, whose names I have yet to memorize (but there’s time…).

Awesome crater at the top of Mt. Eden

Apparently kids slide down the crater on cardboard. I might have to try this.

After that we drove along the coast to the east to the Mission Bay and St. Heliers areas, suburbany towns with really nice beaches and great views of the even more volcanoes.

The beach in St. Heliers

Rangitoto, a volcanic island in the bay

A memorial to a former mayor of Auckland 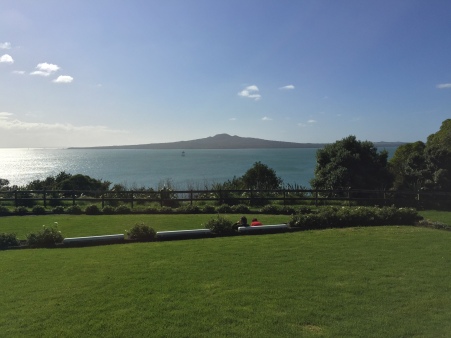 Rangitoto again–I will definitely go there at some point 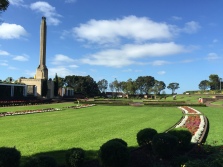 At work, I’ve been mostly busy reading lots and lots of articles and theses on Taranaki, similar volcanoes, and possible methods to use in my research. The short-term goal is to have some ideas about what I want to do and see when we go there later this week. There’s surprisingly little written specifically about the things I want to look at. While that makes it harder to learn about my subject, it’s also cool because it means that there’s a better chance that I’ll be breaking new ground with what I do. It also makes the fieldwork even more important. If I (and by extension, you) can’t learn what I want from papers, I’ll have to do it up close and personal! 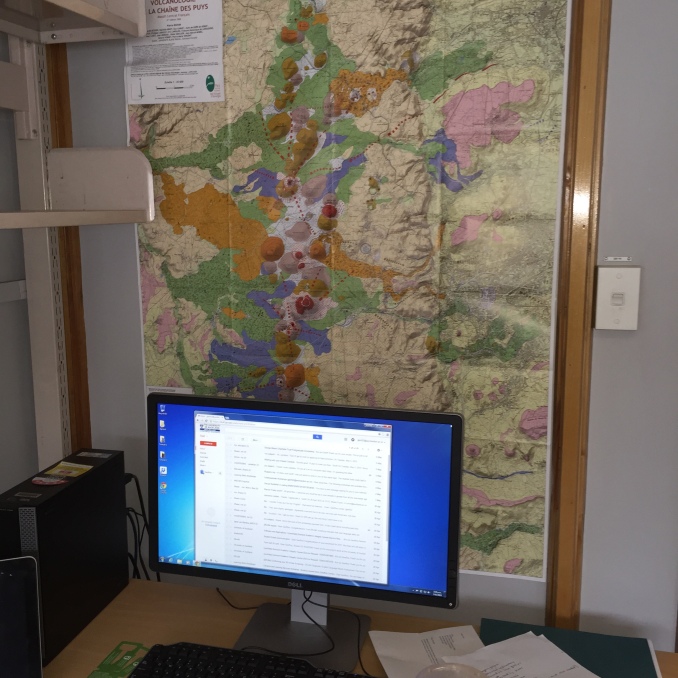 Now I get to look at my awesome Chaîne des Puys poster every day!

One thought on “I Like Feijoas (and Other Interesting Stories)”