Important note: Title must be pronounced in a New Zealand accent.

So, the big day has arrived. Today I’m going to Auckland.

Or, more accurately, in two days I’m going to New Zealand. Due to the 20+ hours of travel time (6 hours to LA and 13 hours to NZ with a short layover) and the +17 hour time difference, I leave Monday evening and don’t arrive until Wednesday morning. I like the “time travel” aspect of the trip–as I fly west, it gets earlier and earlier until suddenly…WHOOSH! A day vanishes and it’s 24 hours later. (WHOOSH is the sound of an airplane crossing the International Date Line.)

When I arrive at 7:15 am on Wednesday, I will go take a nap straightaway. And by nap, I mean go to a volcano. And by that I mean my adviser and a couple of his students are picking me up from the airport and driving straight to Mt. Ruapehu, an active volcano in Tongariro National Park. (Maybe I can nap on the way to the volcano.)

I don’t know what exactly we’re doing, but I can’t think of a much better way to start than diving in headfirst. And since it’s not my fieldwork or my volcano, it should be a fairly low stress (except for the possible sleep deprivation thing) way to get acquainted with the nature and geology of my new home. And also quickly get some nice photos so I don’t have to steal stuff off the internet (without claiming credit, of course) just to show you what the places I talk about are like.

After a couple days of that, I will actually get to Auckland, where I will get to do all the fun stuff one does in a new place, like finding a place to live, getting a bank account, registering at the university, etc. That part should be a little more stressful than sleepwalking around on a volcano. Still, it should be easier than when I did all the same things in Italy without speaking any Italian.

For now, I’ll leave you with a pretty cool map I found that shows the relative size of the US compared with NZ and Australia. NZ isn’t very big, but it is actually a lot bigger and farther from Australia than I expected. But that just means more country to explore! 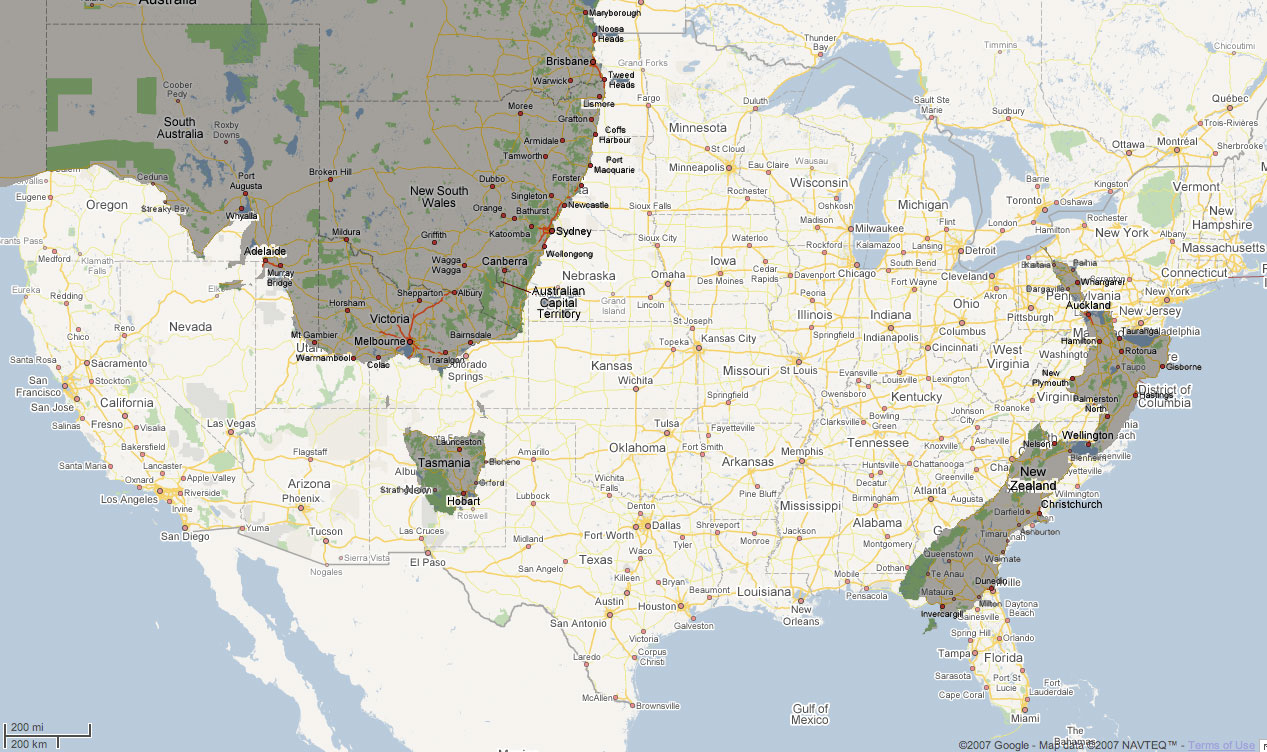 It’s probably going to be a while before I see a lot of you again, but send me an email or message every now and then–I don’t want us to lose touch just because I’m far away! And NZ is a pretty sweet vacation spot. *hint hint*

See you guys on the other side of the world!

One thought on “Back in a Geoff”